The Khajuraho Group of Monuments are a group of Hindu and Jain temples in Chhatarpur district, Madhya Pradesh, India, about 175 kilometres southeast of Jhansi.

Most Khajuraho temples were built between 885 AD and 1000 AD by the Chandela dynasty.

Historical records note that the Khajuraho temple site had 85 temples by the 12th century, spread over 20 square kilometers.

Of these, only about 25 temples have survived, spread over six square kilometers.
Of the surviving temples, the Kandariya Mahadeva Temple is decorated with a profusion of sculptures with intricate details, symbolism and expressiveness of ancient Indian art.

The temple complex was forgotten and overgrown by the jungle until 1838 when Captain T.S. Burt, a British engineer, visited the complex and reported his findings in the Journal of the Asiatic Society of Bengal.

When these monuments were built, the boys in the place lived in hermitages, by being brahmcharis (bachelor) until they attained manhood and these sculptures helped them to learn about the worldly role of ‘householder’.

The Khajuraho group of temples were built together but were dedicated to two religions, Hinduism and Jainism, suggesting a tradition of acceptance and respect for diverse religious views among Hindus and Jains in the region.

The Khajuraho monuments are located in the Indian state of Madhya Pradesh, in Chatarpur district, about 620 kilometres (385 mi) southeast of New Delhi. The temples are located near a small town also known as Khajuraho,[10] with a population of about 24,481 people (2011 Census).

Khajuraho is served by Civil Aerodrome Khajuraho (IATA Code: HJR), with services to Delhi, Agra, Varanasi and Mumbai.[11] The site is also linked by the Indian Railways service, with the railway station located approximately six kilometres from the entrance to the monuments.

The 10th-century Bhand Deva Temple in Rajasthan was built in the style of the Khajuraho monuments and is often referred to as ‘Little Khajuraho’.

The Khajuraho group of monuments was built during the rule of the Chandela dynasty. The building activity started almost immediately after the rise of their power, throughout their kingdom to be later known as Bundelkhand.

Most temples were built during the reigns of the Hindu kings Yashovarman and Dhanga. Yashovarman’s legacy is best exhibited by the Lakshmana Temple. Vishvanatha temple best highlights King Dhanga’s reign.

The largest and currently most famous surviving temple is Kandariya Mahadeva built in the reign of King Vidyadhara.The temple inscriptions suggest many of the currently surviving temples were complete between 970 and 1030 AD, with further temples completed during the following decades.

The Khajuraho temples were built about 35 miles from the medieval city of Mahoba, the capital of the Chandela dynasty, in the Kalinjar region. In ancient and medieval literature, their kingdom has been referred to as Jijhoti, Jejahoti, Chih-chi-to and Jejakabhukti.

The first documented mention of Khajuraho was made in 641 by Xuanzang, a Chinese pilgrim who described encountering several dozen inactive Buddhist monasteries and a dozen Hindu temples with a thousand worshipping brahmins.

In 1022 CE, Khajuraho was mentioned by Abu Rihan-al-Biruni, the Persian historian who accompanied Mahmud of Ghazni in his raid of Kalinjar; he mentions Khajuraho as the capital of Jajahuti. The raid was unsuccessful, and a peace accord was reached when the Hindu king agreed to pay a ransom to Mahmud of Ghazni to end the attack and leave.

Khajuraho temples were in active use through the end of the 12th century. This changed in the 13th century; after the army of Delhi Sultanate, under the command of the Muslim Sultan Qutb-ud-din Aibak, attacked and seized the Chandela kingdom. About a century later, Ibn Battuta, the Moroccan traveller in his memoirs about his stay in India from 1335 to 1342 AD, mentioned visiting Khajuraho temples, calling them “Kajarra”as follows:
 
Until the 12th century, Khajuraho was under Hindu kings and featured 85 temples.

Central India was seized by Delhi Sultanate in the 13th century. Under Muslim rule, many temples were destroyed and the rest left in neglect. Ruins of some old temples (Ghantai temple above) are still visible near (Khajuraho) temples, which contain idols that have been mutilated by the Moslems, live a number of yogis whose matted locks have grown as long as their bodies. And on account of extreme asceticism they are all yellow in colour. Many Moslems attend these men in order to take lessons (yoga) from them

Ibn Battuta, about 1335 AD, Riḥlat Ibn Baṭūṭah, Translated by Arthur Cotterell
The central Indian region, where Khajuraho temples are, was controlled by various Muslim dynasties from the 13th century through the 18th century. In this period, some temples were desecrated, followed by a long period when they were left in neglect.

In 1495 AD, for example, Sikandar Lodi’s campaign of temple destruction included Khajuraho. The remoteness and isolation of Khajuraho protected the Hindu and Jain temples from continued destruction by Muslims.Over the centuries, vegetation and forests overgrew the temples.

In the 1830s, local Hindus guided a British surveyor, T.S. Burt, to the temples and they were thus rediscovered by the global audience. Alexander Cunningham later reported, few years after the rediscovery, that the temples were secretly in use by yogis and thousands of Hindus would arrive for pilgrimage during Shivaratri celebrated annually in February or March based on a lunar calendar. In 1852, F.C. Maisey prepared earliest drawings of the Khajuraho temples.

The name Khajuraho, or Kharjuravāhaka, is derived from ancient Sanskrit (kharjura, means date palm,and vāhaka, वाहक means “one who carries” or bearer. Local legends state that the temples had two golden date-palm trees as their gate (missing when they were rediscovered). Desai states that Kharjuravāhaka also means scorpion bearer, which is another symbolic name for deity Shiva (who wears snakes and scorpion garlands in his fierce form).

The temple site is within Vindhya mountain range in central India. An ancient local legend held that Hindu deity Shiva and other gods enjoyed visiting the dramatic hill formation in Kalinjar area.

The center of this region is Khajuraho, set midst local hills and rivers. The temple complex reflects the ancient Hindu tradition of building temples where gods love to pray.

The temples are clustered near water, another typical feature of Hindu temples. The current water bodies include Sib Sagar, Khajur Sagar (also called Ninora Tal) and Khudar Nadi (river).Local legends state that the temple complex had 64 water bodies, of which 56 have been physically identified by archeologists so far.

All temples, except one (Chaturbhuja) face the sunrise – another symbolic feature that is predominant in Hindu temples. The relative layout of temples integrate masculine and feminine deities and symbols highlight the interdependence.

The artworks symbolically highlight the four goals of life considered necessary and proper in Hinduism – dharma, kama, artha and moksha.
Of the surviving temples, six are dedicated to Shiva, eight to Vishnu and his affinities, one to Ganesha, one to Sun god, three to Jain Tirthankars.

For some ruins, there is insufficient evidence to assign the temple to specific deities with confidence.
An overall examination of site suggests that the Hindu symbolic mandala design principle of square and circles is present each temple plan and design.

Further, the territory is laid out in three triangles that converge to form a pentagon. Scholars suggest that this reflects the Hindu symbolism for three realms or trilokinatha, and five cosmic substances or panchbhuteshvara.

The temple site highlights Shiva, the one who destroys and recycles life, thereby controlling the cosmic dance of time, evolution and dissolution.

The arts cover numerous aspects of human life and values considered important in the Hindu pantheon. Further, the images are arranged in a configuration to express central ideas of Hinduism. All three ideas from Āgamas are richly expressed in Khajuraho temples – Avyakta, Vyaktavyakta and Vyakta.

The Beejamandal temple is under excavation. It has been identified with the Vaidyanath temple mentioned in the Grahpati Kokalla inscription.

Of all temples, the Matangeshvara temple remains an active site of worship.It is another square grid temple, with a large 2.5 metres (8.2 ft) high and 1.1 metres (3.6 ft) diameter lingam, placed on a 7.6 metres (25 ft) diameter platform.

The most visited temple, Kandariya Mahadev, has an area of about 6,500 square feet and a shikhara (spire) that rises 116 feet.

The design lays out a Hindu temple in a symmetrical, concentrically layered, self-repeating structure around the core of the temple called garbhagriya, where the abstract principle Purusha and the primary deity of the temple dwell. The shikhara, or spire, of the temple rises above the garbhagriya. This symmetry and structure in design is derived from central beliefs, myths, cardinality and mathematical principles.

The circle of mandala circumscribe the square. The square is considered divine for its perfection and as a symbolic product of knowledge and human thought, while circle is considered earthly, human and observed in everyday life (moon, sun, horizon, water drop, rainbow). Each supports the other.The square is divided into perfect 64 sub-squares called padas.
Most Khajuraho temples deploy the 8×8 (64) padas grid Manduka Vastupurushamandala, with pitha mandala the square grid incorporated in the design of the spires. The primary deity or lingas are located in the grid’s Brahma padas.
Hindu_temple_Spire_design_principle_concentric_circles_squares_Vastu_Purusa_Mandala_without_label.svg.png” alt=”” width=”200″ height=”200″ class=”alignnone size-full wp-image-501″ />
 
Khajuraho temples use the 8×8 (64) Vastupurusamandala Manduka grid layout plan (left) found in Hindu temples. Above the temple’s brahma padas is a Shikhara (Vimana or Spire) that rises symmetrically above the central core, typically in a circles and turning-squares concentric layering design (right) that flows from one to the other as it rises towards the sky.

The architecture is symbolic and reflects the central Hindu beliefs through its form, structure, and arrangement of its parts. The mandapas, as well as the arts, are arranged in the Khajuraho temples in a symmetric repeating patterns, even though each image or sculpture is distinctive in its own way. The relative placement of the images are not random but together they express ideas, just like connected words form sentences and paragraphs to compose ideas.

This fractal pattern that is common in Hindu temples.Various statues and panels have inscriptions. Many of the inscriptions on the temple walls are poems with double meanings, something that the complex structure of Sanskrit allows in creative compositions.

All Khajuraho temples, except one, face sunrise, and the entrance for the devotee is this east side.
  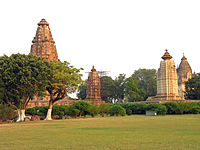